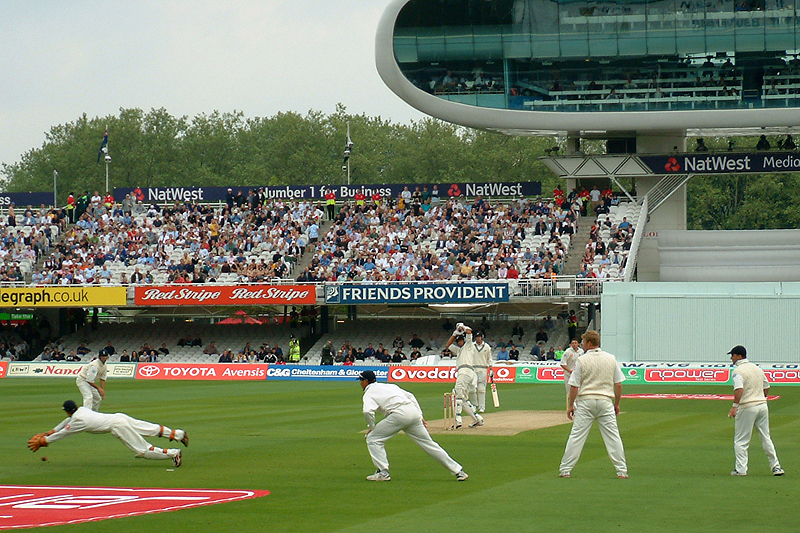 Remember the old Australian team? The team that everyone loved to hate and felt jealous about? They had a very threatening test line up. Openers Matthew Hayden and Justin Langer made life difficult for the new bowlers. In came Punter at number 3, who would neutralize the joy of an early wicket through his intimidating pull shots. If you manage to get the top 2 batsmen out, you have to deal with an underrated Damien Martyn (or Hussey at number 4 after 2006). Michael Clarke came in at number 5, who would go on to average 48 post his retirement. Number 6 used to be shuffled by Symonds or Katich, that would ensure a solid middle order partnership. Dismissing all these batsmen would surely motivate the opposition team to clear things off before they realize that Australia’s explosive one-day opener and wicket-keeper batsman Adam Gilchrist plays at number 7 in test matches. Towards the end of his test career, Gilchrist averaged close to 47 with a strike rate of 82. And we are talking about a period when T20 was taking its baby steps. While Gilchrist gave a solid start for Australia in limited overs, he played the role of a handy lower order batsman in tests. He uplifted Australia’s score to a 400+total in a situation when Australia should have been bundled for a 300. He also made sure the tail isn’t exposed when the top order failed. He was one such player who could quickly add an additional 60-70 runs to the total before making a declaration.

The current England squad might have found its Gilchrist in the form of Jos Butler. England has just whitewashed Sri Lanka in typical sub-continent tracks after its success against India during the home series. They had a few disappointing tours during the start of the year, including the tour of New Zealand and Ashes. They still have a few issues with the top order,especially with the constant shuffling of batsmen at number 3. Their lower order seems to be perfect with the emergence of Sam Curran and the debut of Ben Foakes. It’s also high time that Jos Butler gets a due credit for standing up with the tail. He started his career as a proper T20 player after his successful stint during the Natwest T20. He scored fastest hundreds in ODIs for England against Pakistan, Sri Lanka and New Zealand. However, his county stint wasn’t successful and he was overlooked for the longer format. He scored 5 consecutive fifties in IPL 2018. Interestingly his good form in T20s earned back his test cap during a series against Pakistan, just a few days after IPL. Since then he has scored 6 half-centuries and a century along with a few 30+scores in a span of 17 innings. His contributions spoiled the momentum for India and Sri Lanka during the respective series when both the oppositions were in a commanding position. Jos Butler has transformed himself from a T20 specialist to a complete cricketer.

The Indian Premier League has also provided a platform for new players to perform well at a big stage. Players like Hardik Pandya and Rishab Pant were able to get their national calls after their IPL performance. They are now full time members of the Indian test squad. Although Pandya is going through a form slump in test matches, he did deliver some notable performances as an all-rounder. Rishab Pant showed that he can play fearless cricket when he dispatched a six in just the second ball of his test career. Not to forget his double century stand with Rahul against England at the Oval, when India was chasing a 350+ target with 3 wickets down for just a score of 2. While both Pandya and Pant are in the initial stages of their careers, they are interesting prospects for India in test matches.

Similar to IPL, Australia’s Big Bash tournament paved a way for Aaron Finch, who is now a permanent opener for Australia in limited overs.His hard hitting abilities lured Rajasthan Royals to bid for him in IPL 2010,even before he made his international debut. He broke the record for the highest individual score in T20 internationals twice by scoring 156 against England in 2013 and 173 against Zimbabwe in 2018. 7 years after his international debut as a T20 specialist, Finch donned the baggie green for the first time when Australia played a test series against Pakistan recently. He made fruitful contributions at the top, including a half-century, in his first test match that ended in a thrilling draw. As a player who is known for his T20 skills, Finch will now be taking responsibility as a red ball opener for Australia, with the senior members out of the team. Australia would expect Finch to step up against their upcoming test series against India, to increase its chances for a series victory. Interestingly, Finch is filling the gap created by the absence of Warner, who himself started his career as a T20 opener back in 2009.

In an era when batsmen condition their innings according to the playing conditions, even bowlers have to adapt to the longer format. It was yet again IPL that unearthed a great talent. A bowler with an unusual bowling action made his debut for Mumbai Indians during the 2013 season. He started his first over by conceding 3 boundaries to Virat Kohli. His 5th delivery saw Kohli going back to the pavilion. Since then there was no looking back and his continuous performance earned him a spot in the Indian team for the limited overs. Now, Jasprit Bumrah is the most reliable death bowler for India. Surprisingly, he was selected for the test series against South Africa during the beginning of this year. His selection raised a few eyebrows as critics were skeptical about his red ball performance. He ended up taking the wicket of AB de Villiers as his maiden test scalp. His lethal bouncers and yorkers makes him reliable across all the 3 formats. Even Yuzvendra Chahal, India’s limited over spinner at present, has expressed his interest for a test cap.

Cricket has seen its share of explosive players even before a few decades. Fans have witnessed the batting of Sir Vivian Richards, who used to come to the crease without a helmet and play fearless cricket, at a time when bowlers were more ruthless. After the late 90s, the cricketing world has seen aggressive openers such as Sanath Jayasuriya, Virendar Sehwag and Chris Gayle who have scored triple centuries in tests. With the rise of franchise based limited overs tournaments and long overseas tours, the current generation of players need to adjust while playing all the three formats. It’s interesting to see players like Butler, Finch and Bumrah who started as limited over specialists come up a long way in upgrading their roles. It will be an exciting challenge for these players as even a century or a 5-wicket haul, that boosts a team’s chances in T20s, doesn’t guarantee a victory in the 5-day format.